SPOTLIGHT | THE IN DEEP SERIES by Kella McKinnon ~ Teasers + Excerpts!.

via SPOTLIGHT | THE IN DEEP SERIES by Kella McKinnon ~ Teasers + Excerpts!.

When Brielle Dalton meets the owner of one of the biggest casinos in Vegas, she has no idea that he’s a man with dark secrets who doesn’t know trust, and has never been loved. But what begins as a casual fling quickly becomes addictive, as she’s pulled further and further into a world of danger and lust. Falling in love has never known such an epic battle as this.

Cristos Vicario has sworn not to get involved with a woman beyond an occasional one night stand, but from the moment he first lays eyes on Brielle, he finds himself breaking one hard rule after another. He tries so many times to walk away from her as he struggles to survive his father’s violent legacy and keep her safe from it… But when you crave someone more than your next breath, you always go back again. Not only that, but you do reckless, unforgivable things to keep her.

I had my whole life planned out, more or less, when I got off that plane. I liked to be flexible and leave room open for opportunity, but I knew who I was and I knew what I wanted for my future. Or I least I thought I did. I guess we’re all wrong, sometimes.

I was in Vegas to finish my Ph.D. dissertation in anthropology, and of course have a little fun in my relatively care-free last days as a student, because life was just too short to do anything else. I’d never realized how short until I lost my father five years ago. God, how I mourned him. I still do… but when the tears finally stopped and time made things bearable again, I realized that the tragedy had changed me. In a way, his death gave my life more poignancy… more purpose. I used to be buried in textbooks, buried in goals… but now I made sure to live in the moment whenever I could, do things just because I wanted to, throw caution to the wind sometimes… have fun and live life.

My older brother Jake didn’t take Dad’s death quite the same way, though I wish for his sake that he had. He had been single-mindedly searching for our father’s killer since the day he died, and I kept telling him he needed to live his own life instead, before it passed him by. He had yet to listen to me, but I wasn’t going to stop trying. And I never stopped worrying that Jake was going to get tangled up somehow with the same people that killed our father; that I would lose him too.

But for now, Vegas was everything I’d dreamed it would be, all bright lights and swarms of humanity from every walk of life. An anthropologist’s veritable playground. I stepped off that plane full of dreams, but I never dreamt of the soaring heights and devastating misery I would find there. I would come to believe it was all meant to happen… every last moment. I even began to wonder if there really was such a thing as fate, and whether I ever had a choice, from the first moment I saw him.

The first time was from a distance, on my very first day there, and even then I think a part of me knew, because I couldn’t look away. It was like that moment when you see something flying towards you and you know it’s going to hit you before you can ever move out of the way, so you just watch, transfixed, as it crashes into you. Cristos Vicario: owner of the illustrious Adagio hotel and casino and reputed billionaire playboy. He sure as hell wasn’t what he seemed on the surface. That man had secrets. Terrible secrets. No one knew about the dark and dangerous world he lived in, and neither did I, not until it was already far too late. Not until a lot more people had died for the one goal he relentlessly pursued. And not before I found myself inextricably tied to him forever.

When I met Cristos, and I unwittingly and irrevocably changed the course of my life, I would never have guessed that our pasts were already intertwined in a most horrific way. I certainly didn’t know what kind of man he really was, or how he would single-handedly change my entire world, taking away my freedom and giving me the key to my dreams in one fell swoop.

How could I have known that the one man who should have been my greatest nightmare would become the one thing I couldn’t live without?

He went silent for a long moment, his jaw working as he hashed something out in his mind. “I think I want to make an exception.”

“An exception to what?” I asked, exasperated.

“The no dating rule… I want us to be dating.”

I looked up at him in surprise. That was just about the last thing I expected him to say. I wondered if this was just another ploy to get me into bed. I also wondered if he’d make me sign a waiver first like Lexi had heard. Really rich guys did that sometimes before they dated someone, didn’t they? A kind of non-disclosure agreement in case of a bad break-up? Or entrapment? The thought almost made me smile but I bit my lip instead.

His jaw clenched tighter and he drew a breath in through his nose, as if he was trying to rein in his temper. “Come on, I’ll buy you a coffee.”

I grinned at him. “You’re forgiven.”

He laughed and took my hand, leading me away to the nearest Starbucks. “You amuse me to no end, Brielle. I like that.”

After coffee, he brought me to a really classy sushi place, and ordered a wide selection for me to try.

“You know, this is the third evening in a row you’ve taken me to dinner.”

He gave me a sexy look. “That’s because we’re dating.”

“I haven’t agreed to dating.”

“I don’t care what you did or didn’t agree to. I say we’re dating. In fact… I want you to move to the Adagio. There’s a suite of rooms open on the floor below mine that would be perfect for you.”

I narrowed my eyes at him. “Uh uh, no way. I’m perfectly fine where I am.”

“Brielle, where you’re staying is dangerous, not to mention… unsavory. I don’t want you there, not when I own an entire hotel.”

I rested my chin in the palm of my hand and gave him my most stubborn look. “No.”

He stared at me hard, as if he didn’t understand why I wasn’t bending to his will like everyone else apparently did. “Brie… I have to go out of town for a few days. I leave tomorrow… I would just feel so much better if you were staying somewhere safe. Please.”

So he was going to shelve his dominant alpha side and try asking nicely. I kind of liked the domineering alpha better. I know all about why women love alpha males. Why romance novels are chock full of them, bursting at the seams with temperamental cave-men and jealous, domineering brutes. It’s biological, and it really does go back to caveman times. Back then, we all wanted a man who could single-handedly kill a mammoth for dinner, keep us safe from a myriad of predators, fight off the bad-ass tribe next door, and then still have plenty of energy for sex so we could have babies and pass on our genes to the next generation. Yeah, we might be living in a different age now, with grocery stores and police departments, but our cave-girl DNA hasn’t entirely caught up with the times. Deep down, we still want to feel safe and protected by a man sometimes. And I think that deep down, all that a lot of these alpha males want is to cherish and protect their woman.

I wasn’t going to be moving into his hotel, but I kind of liked that he wanted to protect me. I thought of the gun, and I wondered if he had it on him right now. Sometimes when we were just talking or joking around, I completely forgot that I didn’t really know him, and that he had secrets, maybe even dangerous ones.

Here are the quotes which begin each chapter of the In Deep series, in order.  Can you figure out the plot line? 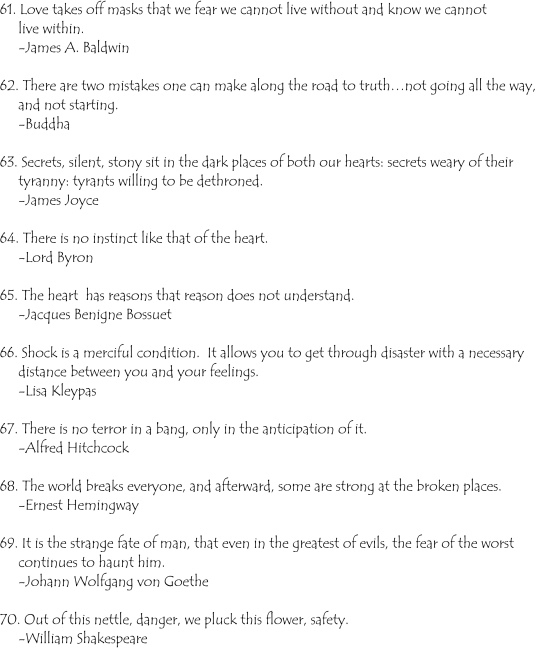 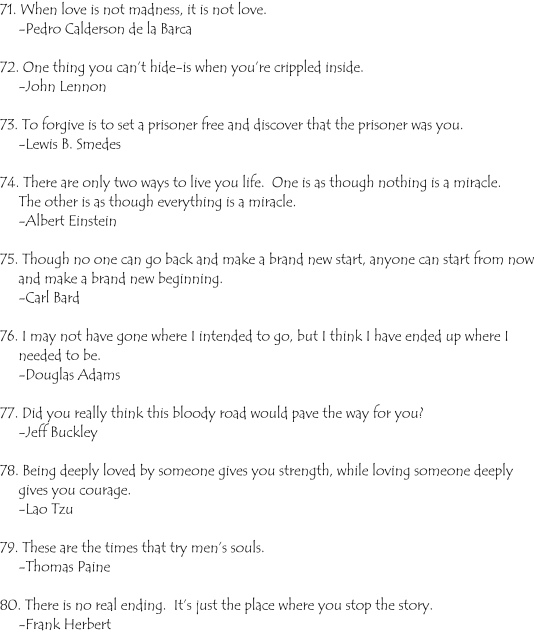 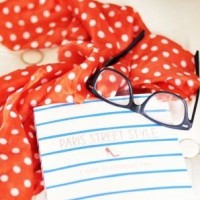 Read a sample of In Deep

traveling near and far...a new journey with each read

We love everything about books!!

Between The Lines Book Reviews

The Diary Of Book Enthusiasts

Sharing a Desire and Passion for Reading!

because sometimes you need a little schmexy in your life